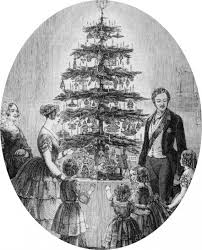 Long, long ago, before people decorated their homes with Christmas trees to make their homes feel festive for the holiday’s, or to have something to put their presents under, the ancient people used evergreens to decorate their homes as they anticipated the coming of spring. During ancient times in the Northern hemisphere, they believed that the sun was a god. They believed that winter came due to their sun being weak and ill. On the shortest day of the year, known as the winter solstice, which also falls at a time that is close to Christmas, they believed it was a time when their god was starting to be well again and so they celebrated by filling their homes with evergreen boughs. It reminded them of all the green plants that would soon grow again when spring arrived.

Skip a few centuries down the road and later the Christmas tree tradition evolved into bringing the beautiful evergreen tree varieties such as Pine, Fir, and Spruce into the home and decorating them with candles. It is said to believe that the 16th century Protestant, Martin Luther, was taking a stroll and was awed by the twinkling stars amidst the evergreens. He wanted to recapture that scene for his family and did so by bringing an evergreen into their home and decorated its branches with lit candles.

It wasn’t until the mid-1800’s that this tradition was accepted by Americans. Queen Victoria and her German Prince, Albert, were published in the London News with a sketched illustration of their family standing around a Christmas tree. With her popularity, America quickly caught on to the idea of the Christmas tree tradition and by the late 1800’s Christmas trees and ornaments were quickly on the rise.

It’s crazy to think how far we have evolved from the original reasoning of the evergreen décor during the winter months. Evergreen branches decorating the home in anticipation of spring, the beauty and recreation of stars twinkling amidst the evergreen forests, all the way to jumping on the bandwagon of a public figure. Today we have endless possibilities for decorating; from freshly cut Pine trees where the sap seeps its way on to your fingertips, all the way to brightly colored artificial pre-lit trees. The options for holiday decorating are plentiful and evolving, but the joy and anticipation the Christmas season brings is unchanging.